“After the beach and before going to party, what else than an ESL Match. It is why ESL EU Cube2 staff proudly presents the 1on1 Instagib and the 4on4 Instagib CTF Summer Leagues. Do not watch TV, play on ESL.”

That was the tag line for the ESL (Electronic Sport’s League) Cube 2: Summer League that was just about to begin back in July, 2009.

Sauerbraten first joined forces with ESL in June, 2009 with both an instagib and efficiency 1vs1 cup followed quickly by an instagib ladder, all of which saw pretty good success where Honzik1 and tenshi both claimed victories. 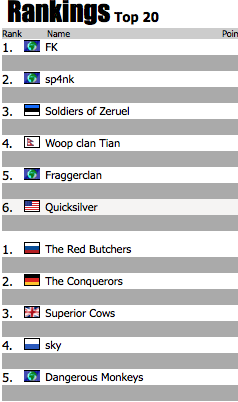 However it was the Summer League with both it’s 1vs1 instagib and 4vs4 ctf championships that really saw great promise. There were a total of 11 clans that signed up for the ictf championship in two divisions, as seen here.

Games were played on several dedicated ESL servers and had a limited amount of time before a result was needed to be recorded. According to what little information that is still present on the ESL website, FK was the winner of Division A and RB the winner of Division B, however I have no idea if a title match was ever played nor who was victorious!

There was at least one other attempt to compete in another cup after the summer league, but from what I remember interest began to wain and the whole idea came to a halt before too long. There was yet a further attempt to revive the ESL league in March, 2010, championed by }TC{LePorte (who was also the Sauerbraten ESL admin), but it seems very doubtful that it even took off.

There are still a lot of players in the community today who took part in the ESL tournaments, so please feel free to add your memories of this league and correct me if I’ve misstated anything in the comments section below!

We would love to hear about your Flashback!

Please use this form to submit a story, photo, or video of Sauer days past.