To start things off, we introduce you to our first map: Stahlbox. Made by ex-cm| rabe, this FFA/Duel map offers new textures, stunning details, fun game play, and an overall uniqueness usually only seen from the guys over at Cubic Matter. The details and appearance are what really sets this map apart; the new textures are not only amazing, but are also flawlessly applied to the map and it’s geometry. The lighting is simple, yet creates beautiful contrast and shadows, and all the little details might even distract you for the first ten minutes before you even start your game. For you stat nerds out there, this map comes in at a slim 33k WTR for it’s level of detail. In comparison, Turbine = 9k, Forge = 58k, and Reissen = 85k.

But enough about the appearance! For an in-depth description on the map’s game-play, be sure to check out our new Map Discovery page! The map is available for download here, or over at it’s original home at quadropolis.us/node/3911

Our ratings of the map:

Be sure to try it out for your next duel!

Stahlbox is a typical Rabe map, lots of climbing possibilities and a simple layout, which can be described as a big outside with a C-shaped path around it. It stretches (roughly) over two levels and offers lots of possibilities to hide. 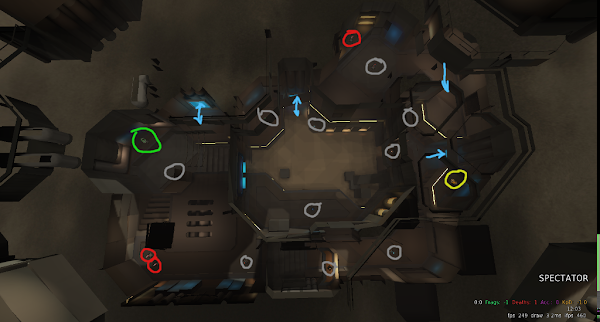 The map is clearly directed towards slower ffa gameplay. Players looking for an effic or insta turbine like game, will be disappointed. All others will have a great deal of fun, no matter which duel mode you are gonna play!

The flow of the map is great: wide passages and high ceilings make sure you won’t get slowed down. The central ceiling could be a bit higher though, you can easily bump into it with a rocketjump. It further hosts 3 teleporters of which 2 are direct connected with each other. One teledest has a very, very well done exit, which catapults you out and lets you keep the pace. (see screen below) 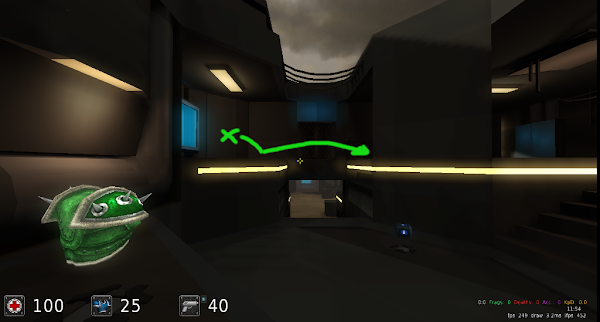 Although there are lots of climbing possibilities, to make a great escape, there should be some more. One of those spots is in the great hall, where your only choice to escape is a staircase or the teleport, both ending up in the green amor area. A little edge would make it possible to go up the platform and reach the other side of the map. This move would be faster than via the neighbouring platform. (see screen below) 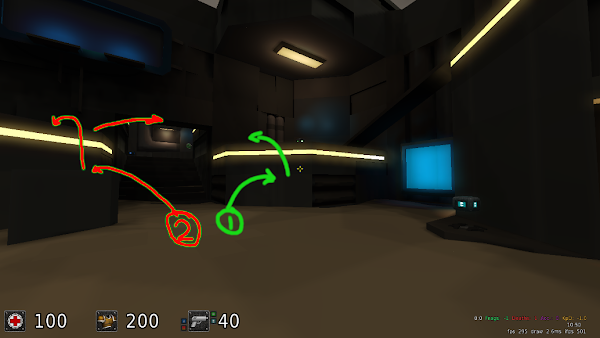 Another of those death traps is at the cg at yellow amor. If you are pinned here, your only choice would be to stick your head out of the cover and use the nearby teleport. Two edges would make it easy for you to reach the high platform without being exposed to a rifle of death. 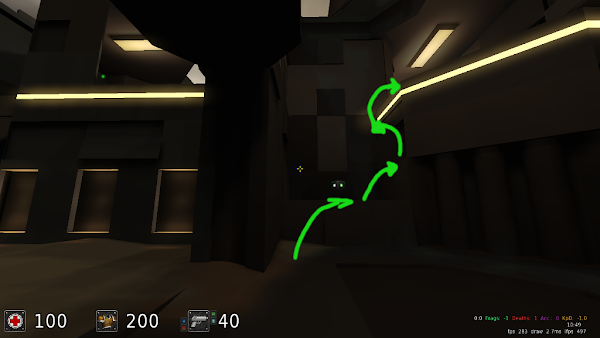 Over all, the clipping of the map is done very well. As noted earlier, you just won’t get stuck or slowed down running around. Sadly the beautiful looking billboards are also fully clipped. It would be nice to be able to step on the lights and use them as a camping spot or a way to reach the other side as shown in the next screenshot. 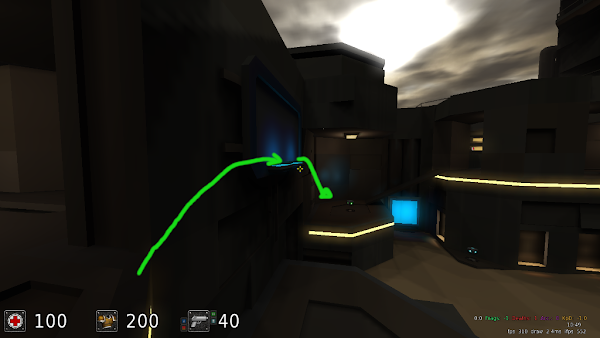 Like with the most maps, the creator wants the players to starve and crave for items and therewith fucks up the chance of a comeback of the weaker player. There are in total 3 (!!!) health bubbles, of which two are located near green armor and 1 is near the yellow. This just doesn’t match the gameplay that Sauerbraten offers. There are also very few weapons lying around, two of each to be precise. They seem to be very evenly distributed over the map, but keeping in mind the respawn time of 15 seconds, you have a very limited chance of getting a good weapon when you need it.

The best spot you should control would be the green amor room. From there you can reach both rifles, shotgun, rockets and grenades and deny your opponent to reach the second rockets. While controlling the green amor and two of the three health bubbles, you can still reach the yellow amor very quickly (time it boys!).

Because of the size of this map, it makes sense that there is no quad nor health boost as this would indeed overpower the controlling player.

All in all, Rabe created a beautiful map, that’s definitely worth to be included into your standard map pool. We say, download it now!